Namibia on a budget: Sandboarding in Swakopmund

One of the friends I made during the tour to Etosha decided to join me for my next part of the trip. We spent the rest of the week travelling together. He had already been in Windhoek before, so after waking up we started the day with a tour around the city. We walked to see the church, the zoo park and the parliament park as well. Went to the craft markets in the street where I bought my first and only souvenir (a necklace that can also be used as a belt) then went to the Namibia art craft building. After returning to the hostel for lunch we spent the rest of the day in the pool getting a tan and swimming. Windhoek is a city that can be visited with about 2 to 3 hours. 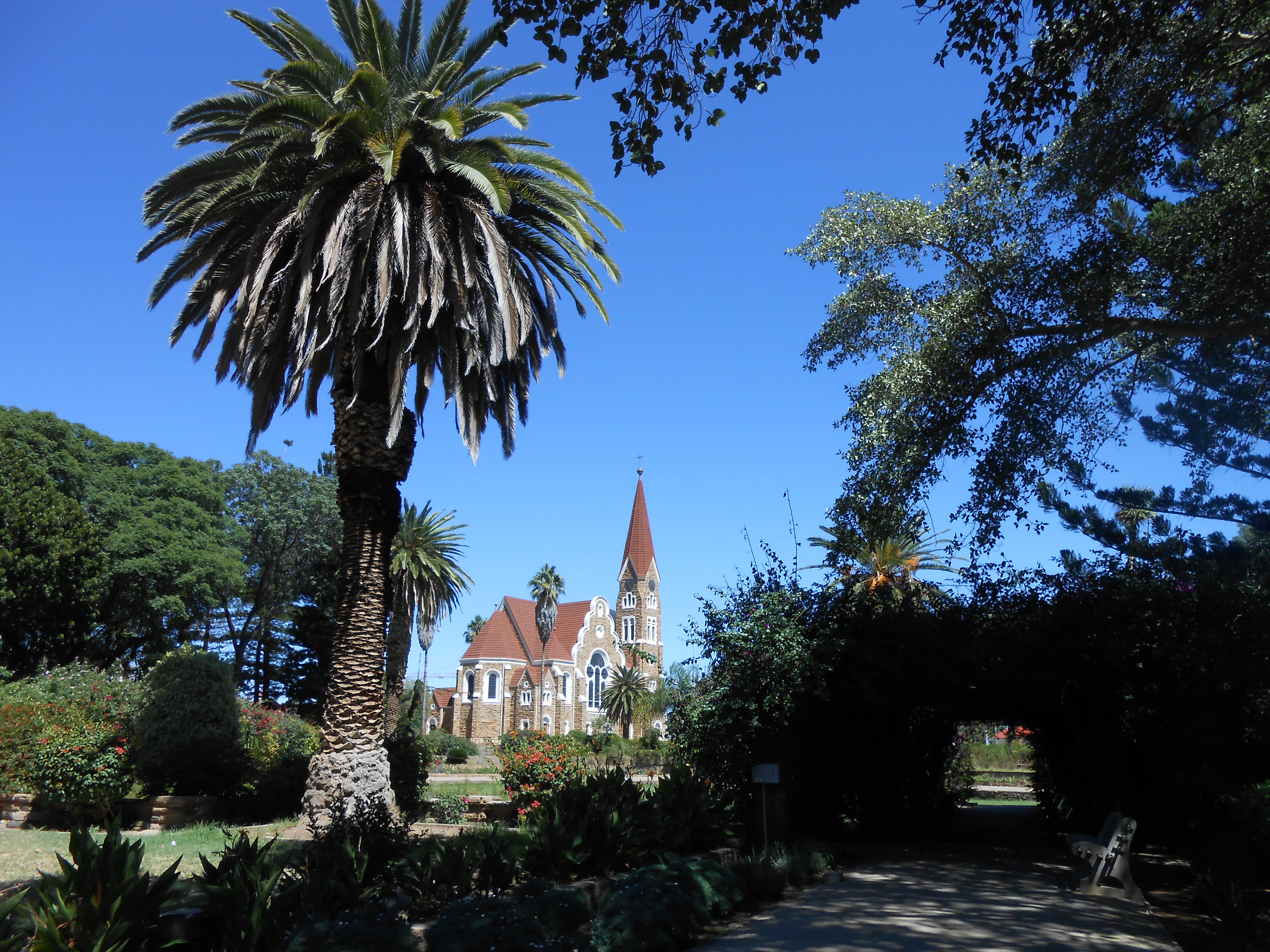 Day 5: transfer from Windhoek to Swakopmund

Thank god I had someone to talk to for the 5 hours journey, it would have been so boring without him!

On arrival to Swakopmund we went down to the beach and spent the evening having deep meaningful conversations about different topics. Among them if we could beat a cheetah fighting with only our body or which was the weight difference between a full-grown male cheetah and lion. We obviously had to look it up later. The waves crashing on the sand, the promenade with the stars and the moon, all accompanied by friends and beer. Couldn’t get better.

What an exhausting day. We woke up to go sandboarding. They picked us up and we drove to the dunes. After trying different boots and helmets to make sure they fit us perfectly we started climbing up the dunes. Yes, no lift or anything, just our legs carrying the board and us. Sandboarding is an eco-friendly activity because the dunes are part of the Namib-Naukluft National Park and no one is allowed to build anything permanent – hence why we had to climb up. After a well deserved break and waxing the tables, we started the lesson.

Considering I’ve been skiing since I was 3, I thought my balance would be better on top of the board. I guess I didn’t have confidence and ended up on my knees an awful lot of times. Anyway, I didn’t see it, but the instructor kept saying I was getting better. Well, I guess if we consider from falling 20 times to falling 8 an improvement then yes, I improved.

After every time going down we had to climb the dune again. It got easy compared to the first one, but it was still quite hard. Walking in the sand is trickier that I thought. We need to consider that the sun was hot even with the breeze. After a bit we changed and did the Dazzie, that is the name they give to thelie down sandboarding. They never do stand up sandboarding so it’s as smooth as possible for the lie down.

The first 3 seconds when they push you from the top and you see yourself racing on the sand the adrenaline rush is quite big, but after trying to put your feet down in the sand and realising that stops you or redirects you, I just let myself go! Markus, the friend I met in Etosha, and I were racing each other to see who got the fastest speed. We were tires in 64km/h and he beat me on the last one arriving to 69km/h. To end up the activity we stand up sandboarded to the bottom of the dunes. We had a lot of soft drinks (in need of sugar) and lunch. 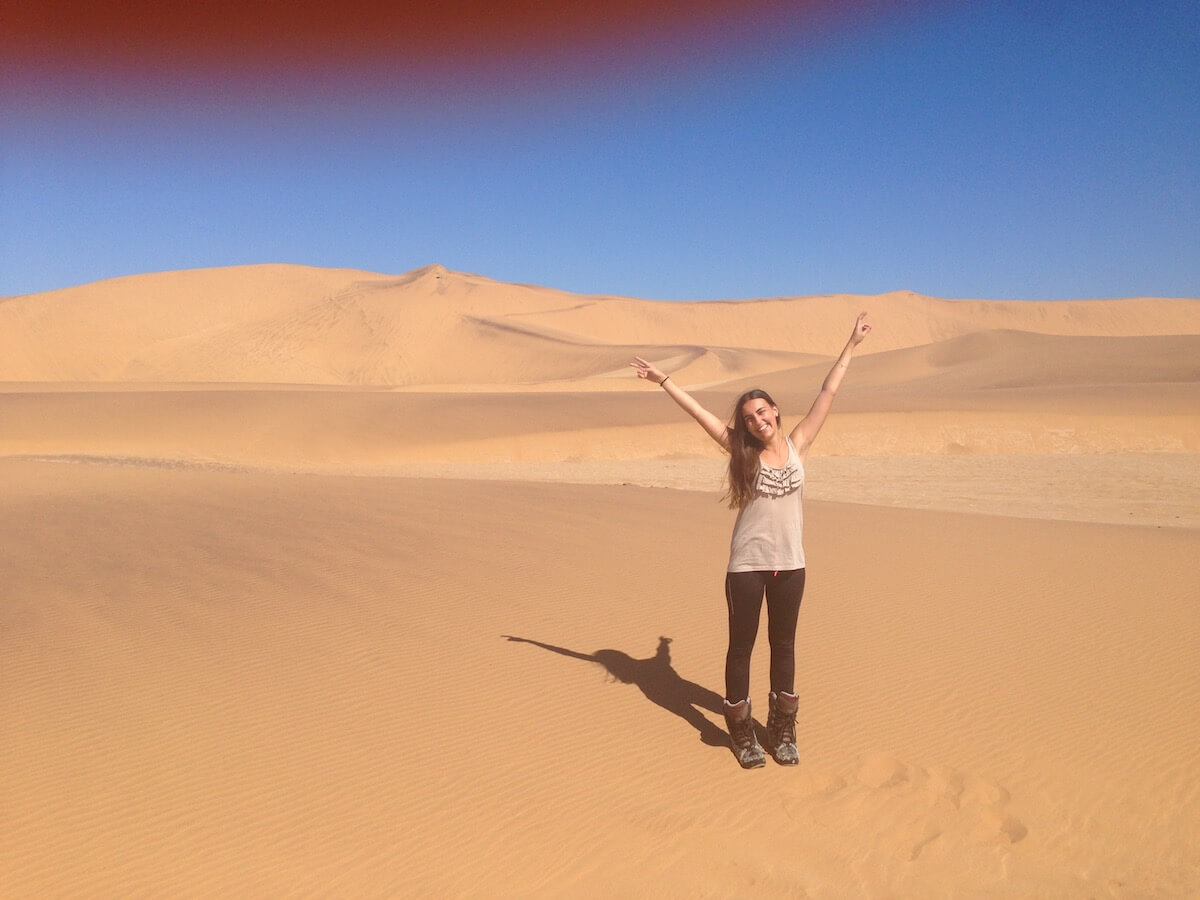 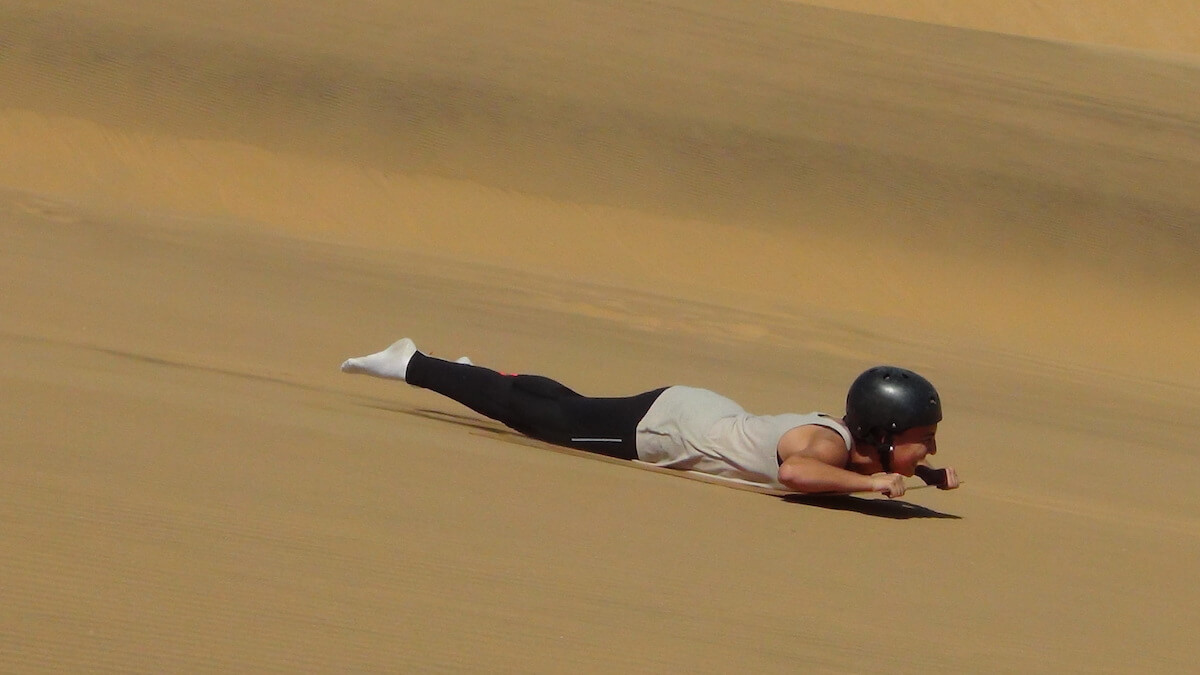 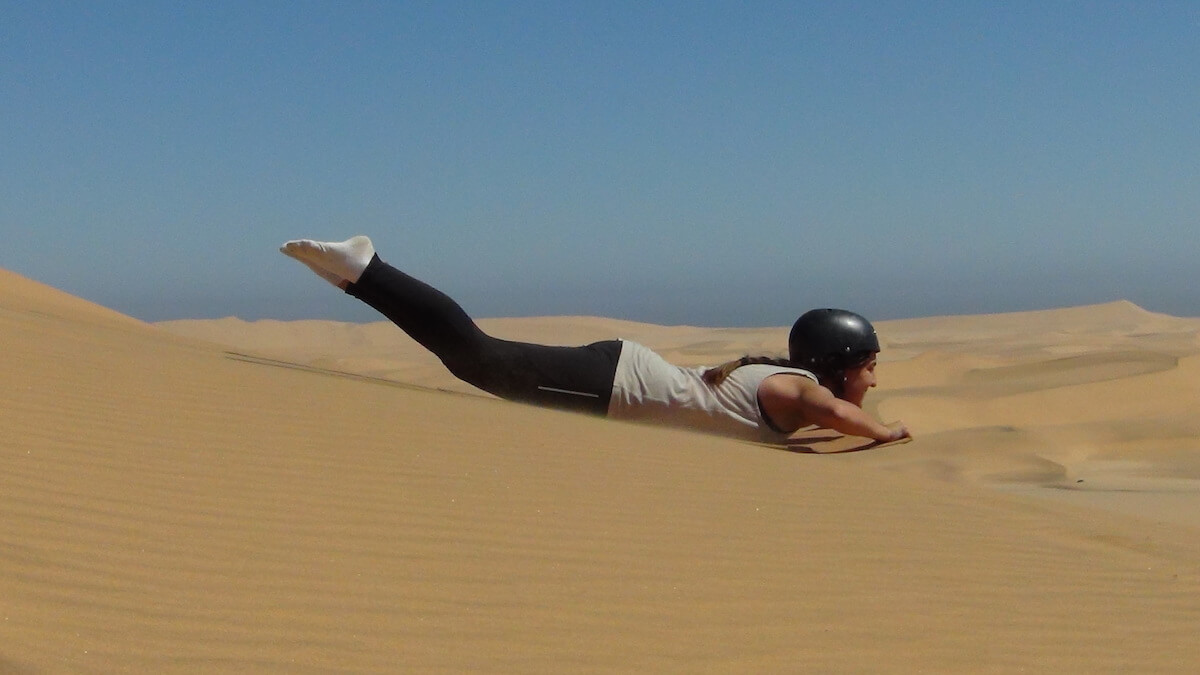 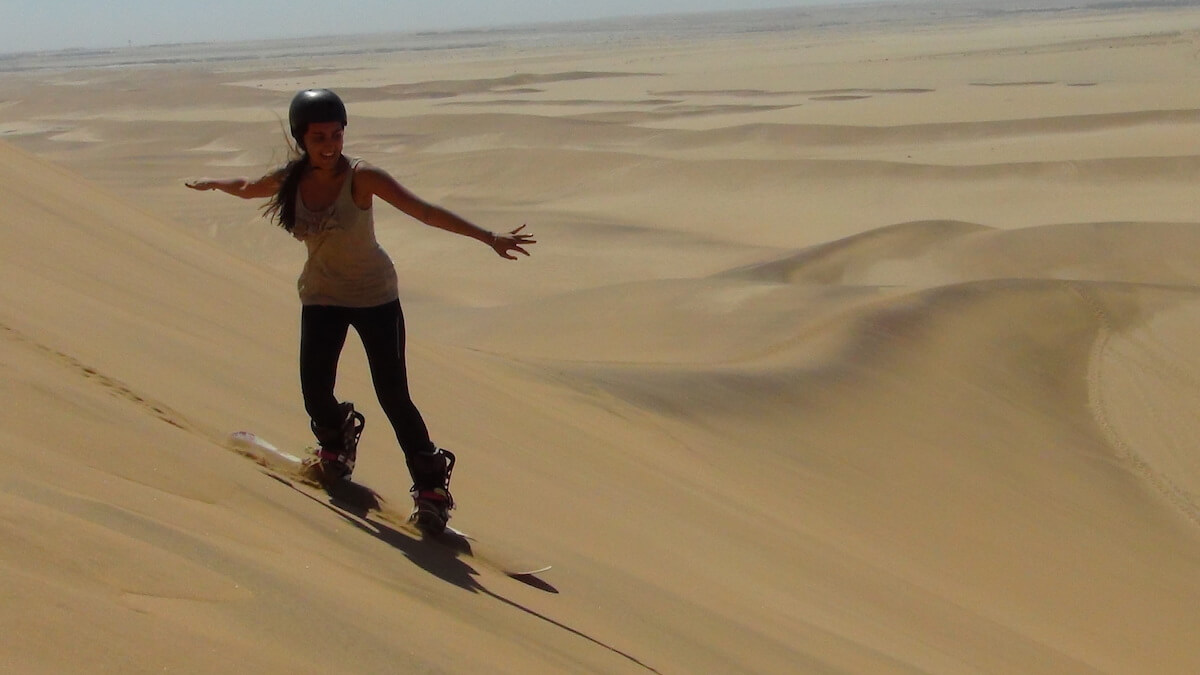 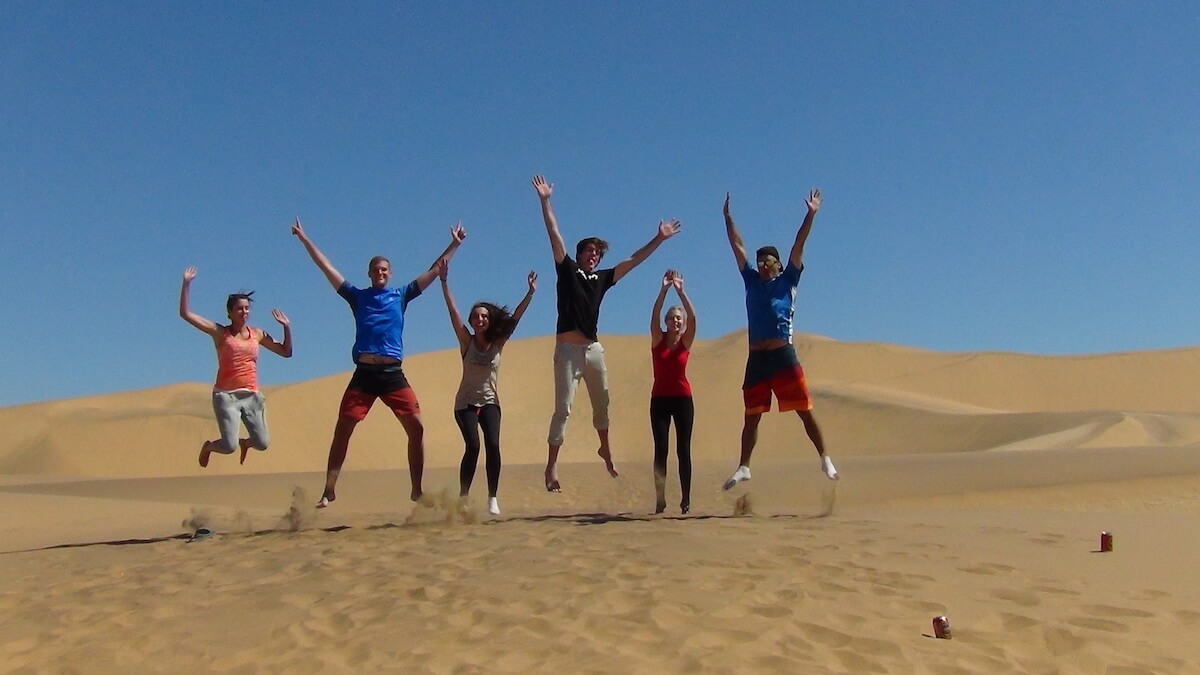 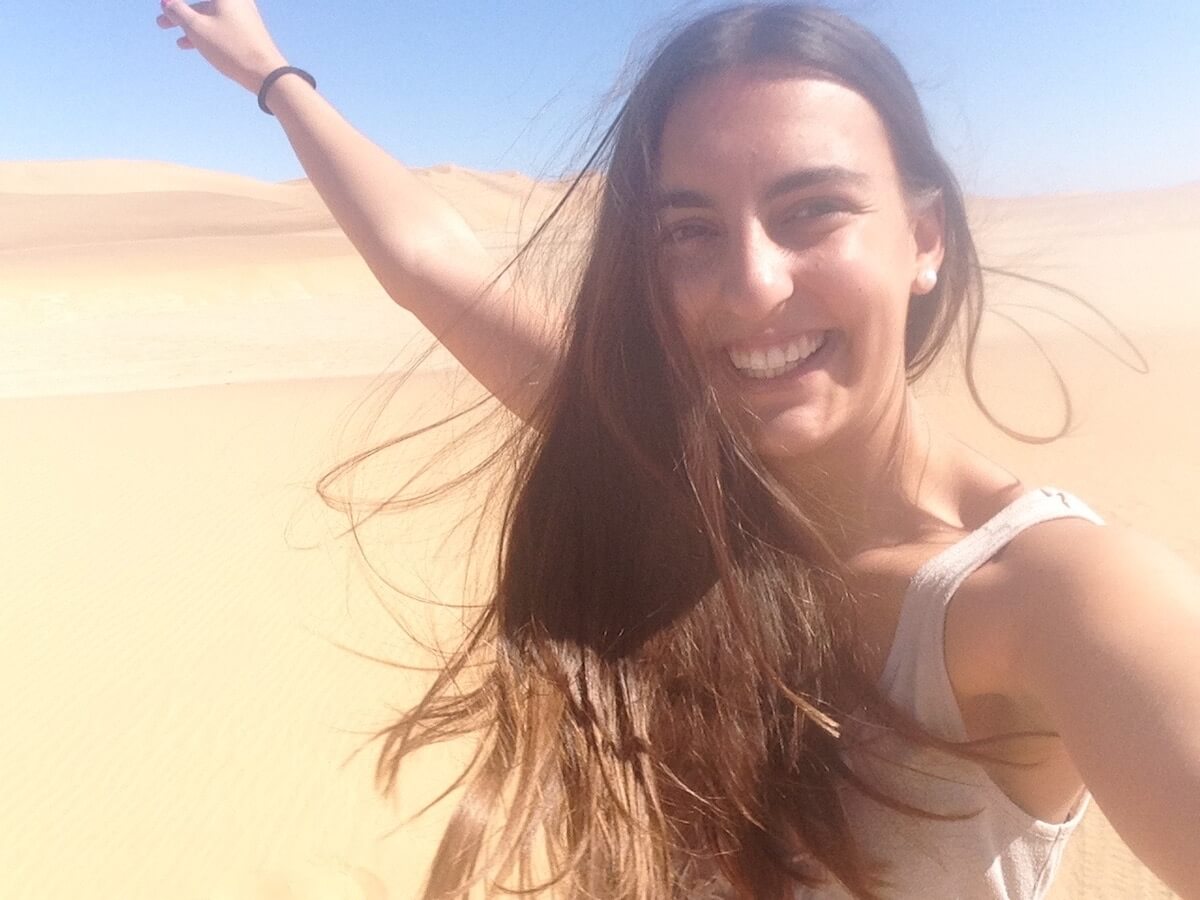 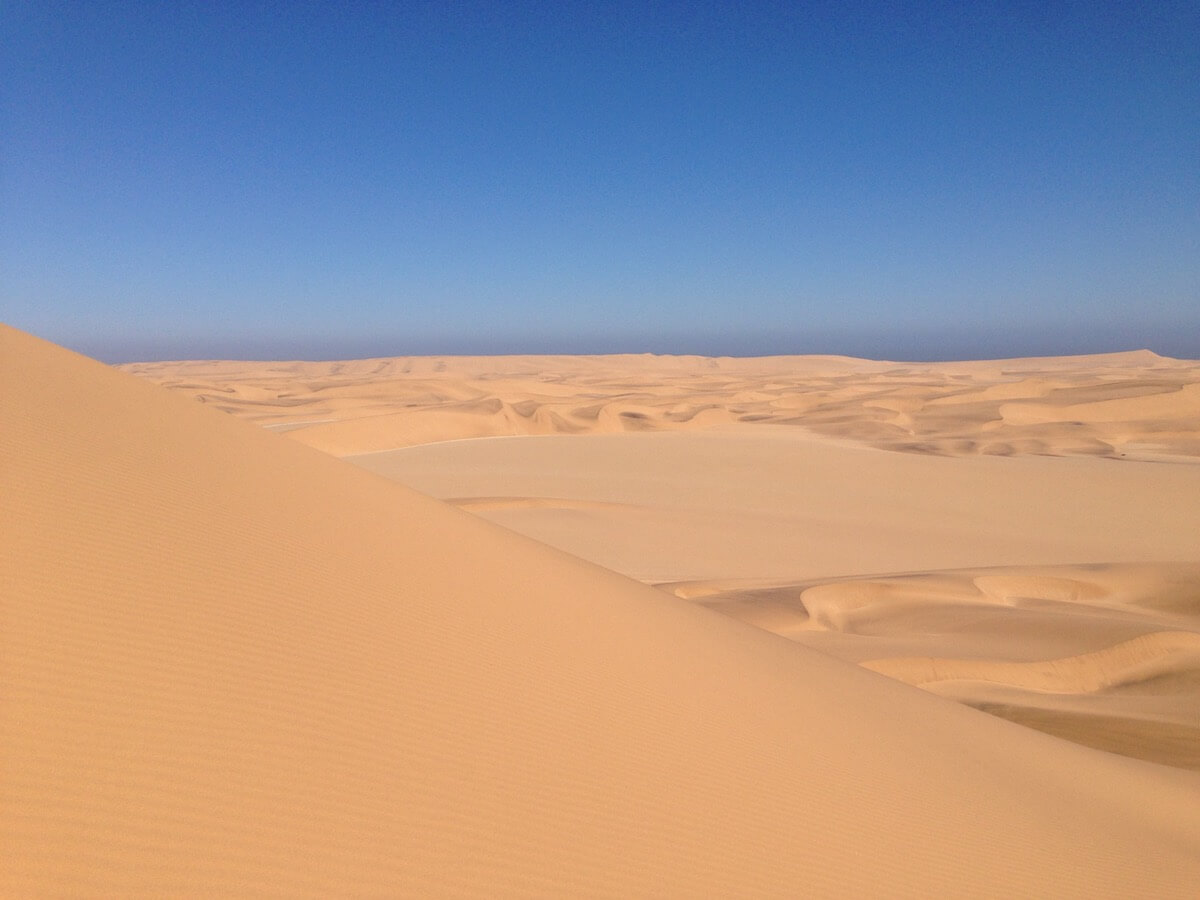 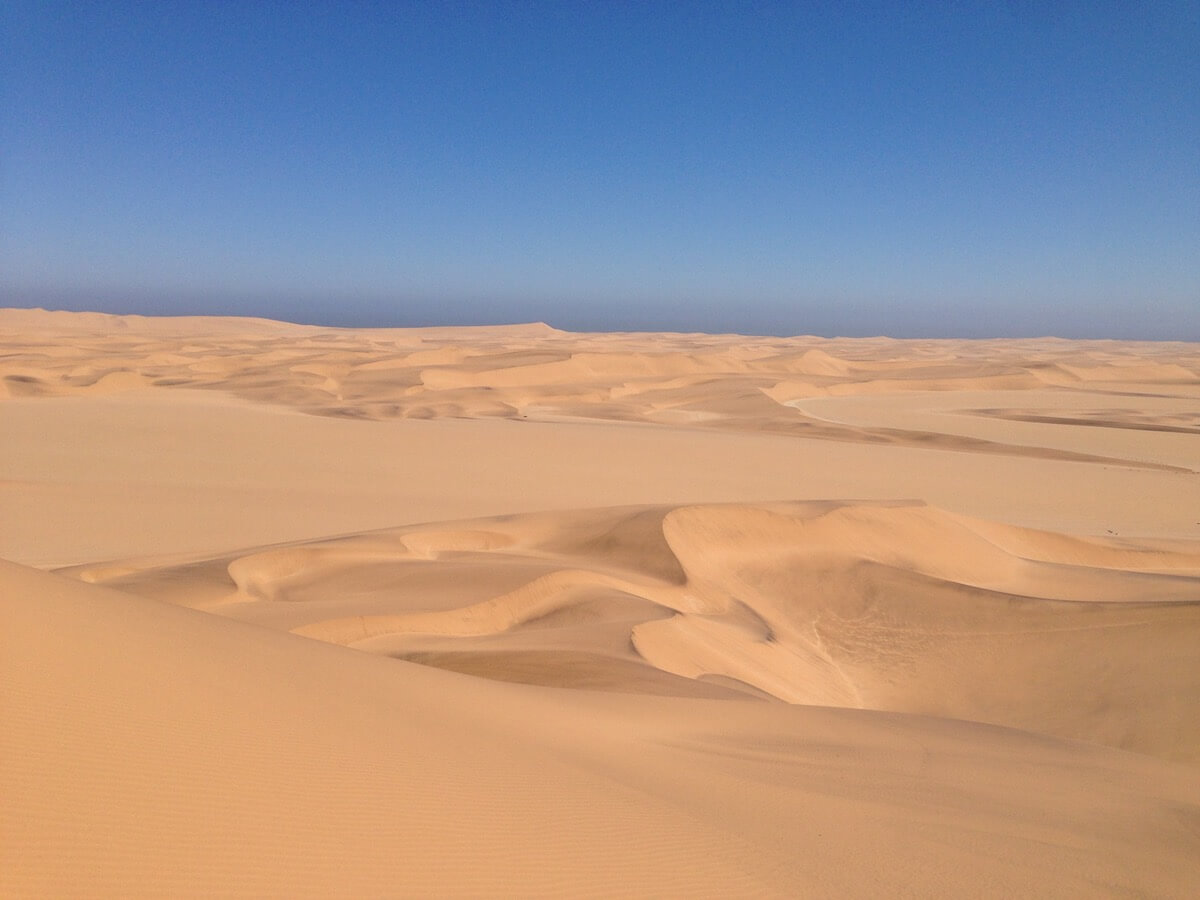 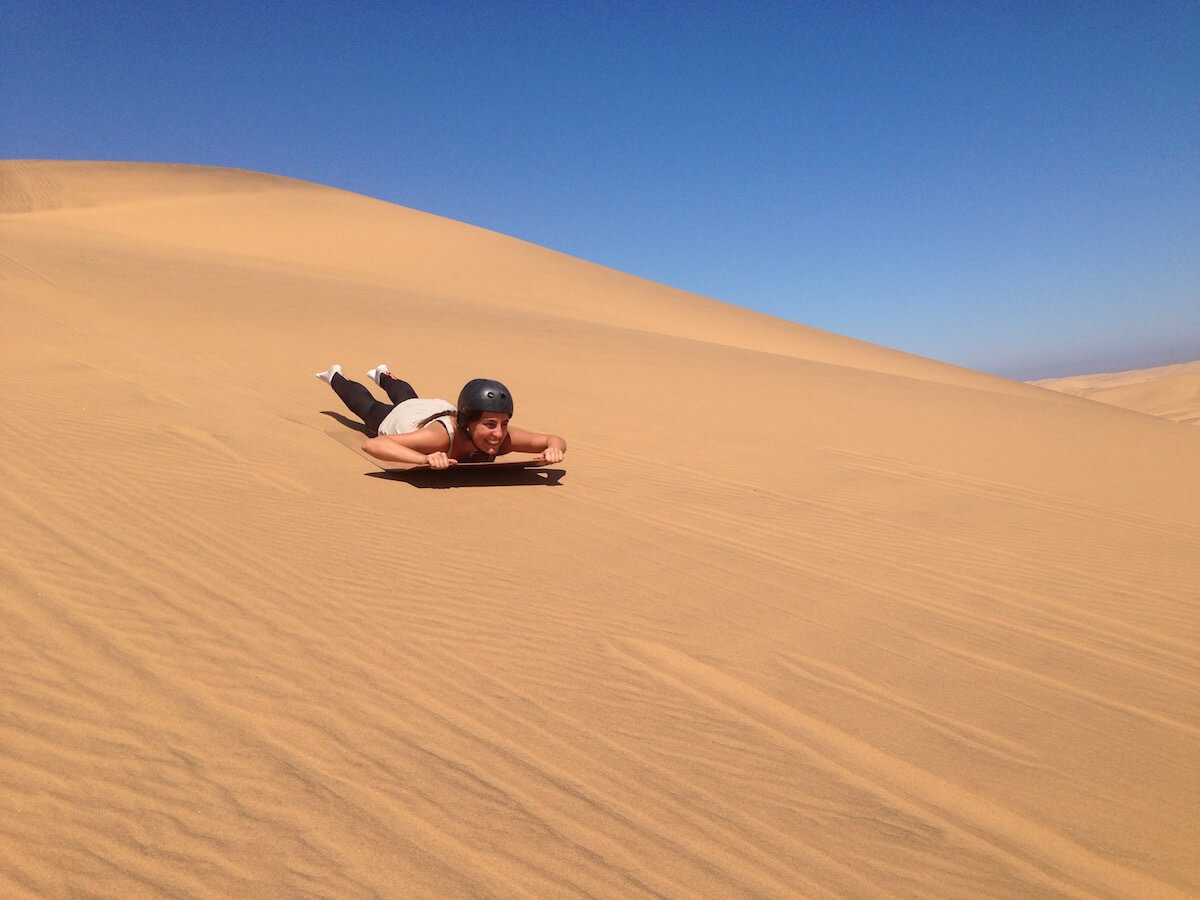 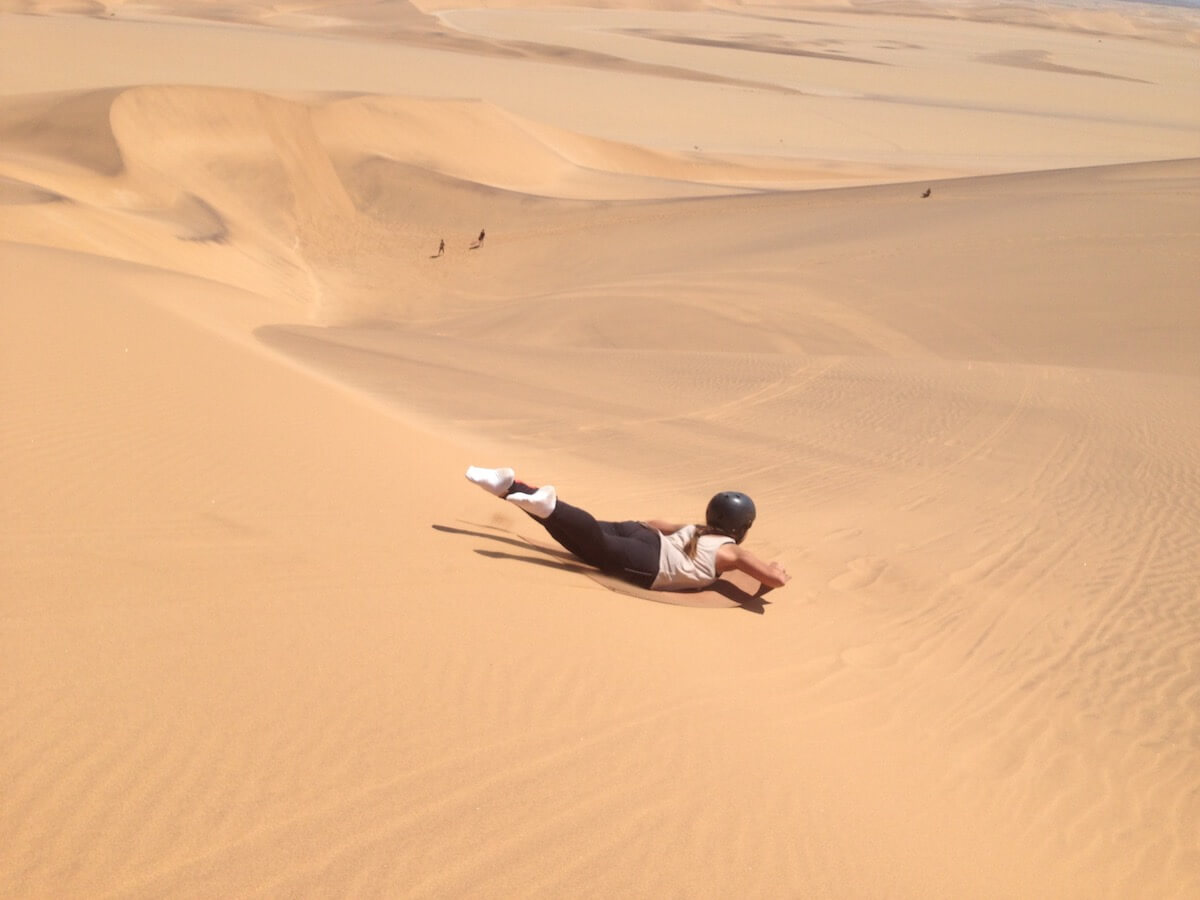 Arriving at the hostel and realising how tired we were, we had to take the longest shower ever – I had sand everywhere!

And after getting ready I was picked up to go horse riding while Markus went skydiving. I did it in the Okakambe stables and Noah, the guide, explained the name of my horse to me: Rooisand. I don’t speak Afrikaans [yet] so rooi wasn’t a word to me before. It means red sand, which I think it convenient.

We went on an amazing ride through the riverbed of the Swakop dunes. We were on the called “moonland” and galloping whilst enjoying the sundowner. It was on the top of the bucket list, so beautiful to be racing with Rooisand and watching that stunning scenery. It was truly breath taking. Although we never saw any springbok I could see the trails on the sand. By the time I got to the hostel it was 8pm and we went straight to bed – that’s how tired we were!! 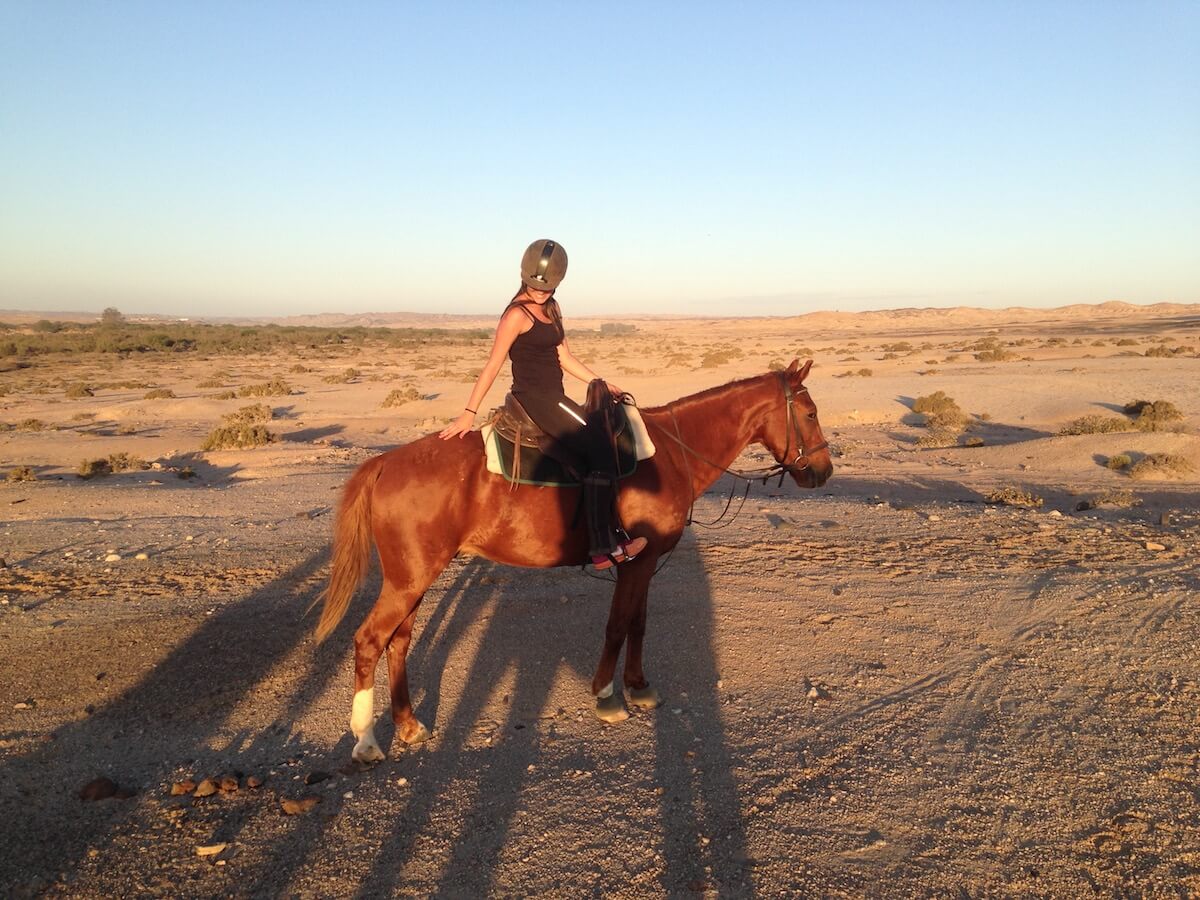 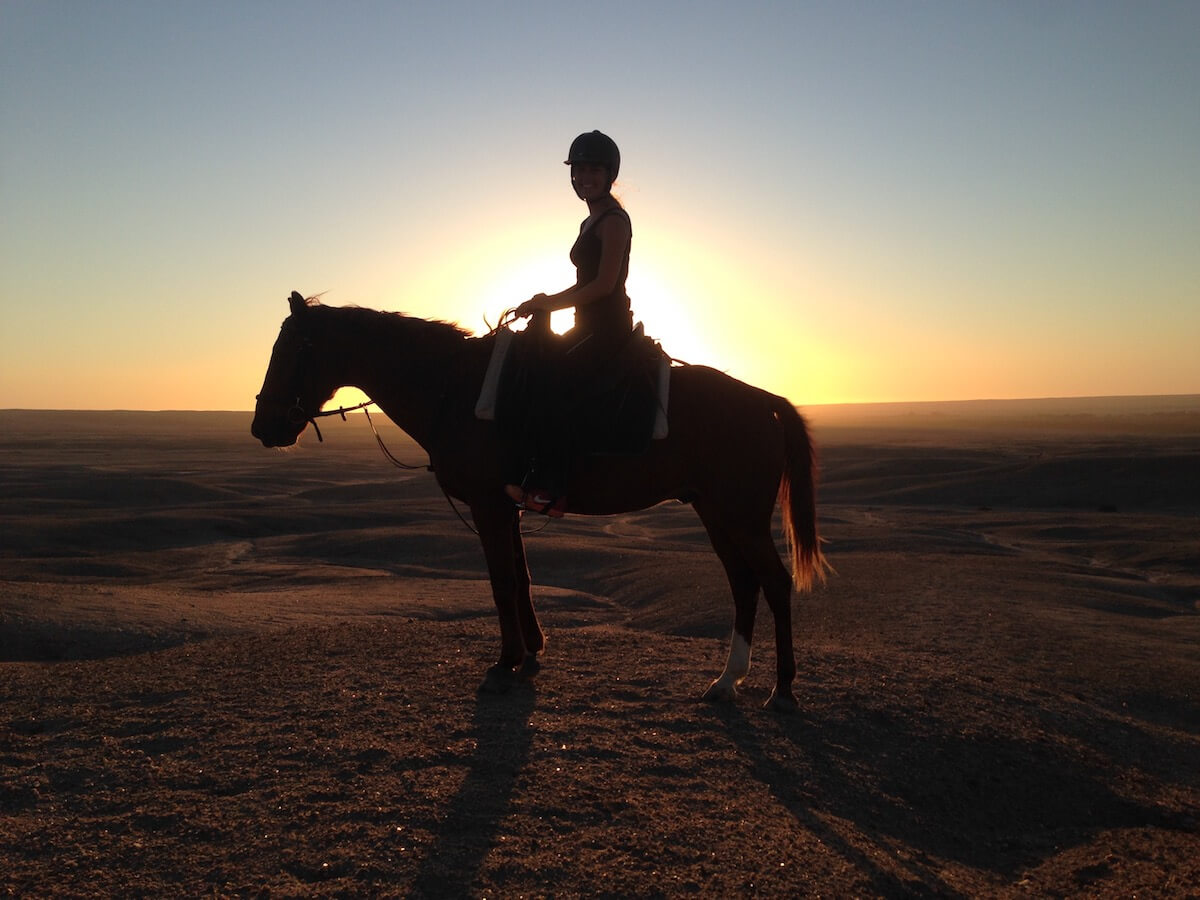 Day 7: Drive back to Windhoek

A good 6am breakfast before they picked me up and a “see you later” that was hard to say to my travel buddy. I’m on my way to Windhoek again, my time in Namibia is ending. The good thing was, the staff at the Chameleon Backpackers already knew me (I stayed there every night while in Windhoek) and they made me feel at home again joking with me. I spent my last night playing the quiz they organize at the bar, playing pool and drinking Smirnoff Storms. The good hostel life! I definitely recommend them while in Windhoek!